The Pioneering Spirit, which is 382 m long and 124 m broad is the biggest ship in the world. The ship has a double hull which makes one think of a catamaran. The offshore company Allseas designed the ship for dismantling big platforms offshore.

Normally a drilling platform is dismantled in smaller parts. With the Pioneering Spirit it is actually possible to lift a platform weighing 48.000 tons in one piece from the base, lighten it and then transport it. Beside dismantling the platforms, the Pioneering Spirit can also lay pipelines for oil and gas transport at a depth of 3500 m. and at a speed of more than seven kilometers per day. Below is a short video in which the Yme platform is removed in the North Sea at Norway (pictures are from Allseas).

At Allseas nothing is left to chance; everything on the ship is done double so that one can work undisturbed if a part, for whatever reason cannot be used again.
With our own eyes, we have seen how far this goes; there are two streets in which the pipelines are welded and even the wheelhouse has a double just in case the other one can not be used, for example, due to a fire.

Specially for the for the Pioneering Spirit a test platform has been placed in the middle of the sea. On this test platform, a measuring system with cameras and a diesel generator, which can be operated from the ship with the wireless Corvus remote control in combination with our Pavo receiver. 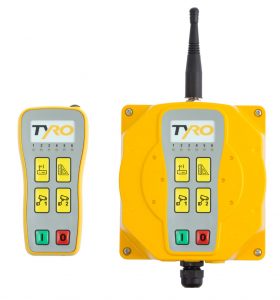 In changing weather conditions all types of situations are tested.

With the Corvus / Pavo the cameras can be switched on from 500 meters, the measurement system and switch the diesel generator on or stand-by.
This combination was also used for the removal of the Yme platform in the North Sea, as shown in the video above.

Also for this installation there is a complete back-up installation built in. And if the transmitter for any reason no longer can be used, then the installation can still be served by the receiver.