Coal has been mined in Ibbenbüren since the 16th century. With green energy becoming increasingly more popular, the German government decided to gradually shut down all coal mines. The coal mine at Ibbenbüren is one of the last two coal mines that are still operating in Germany. To effectively mine as much coal as possible from a depth of 1500 meters, before the shut-down, it was decided to have a Tyro remote control installed.

Typical characteristics of the Ruhr region

The extensive region of the mining company is characterized by one thing, which many people can remember from documentaries or photos of the Ruhr region, and that is the shaft. From here there are two lifts that go down to a depth of 1545 meters. At the lift shafts, there are two sets of railway lines to transport the mine wagons, to or from the shafts.

Wagons on the right track

When the wagons are on the way to the lifts, the switches are used to indicate which track the wagons must be driven on. As the actual setting was not clearly visible from the track the company placed a signal there. It turned out that this procedure was not efficient enough; forklift truck drivers regularly had to get out of the forklift truck to set the switch manually. This is not only inconvenient but also time consuming. 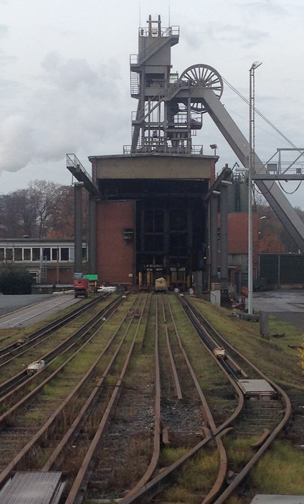 The application of a wireless remote control

With the Tyro radio remote controls, switches can be operated throughout in the whole area due to the big range of the system. The client-specific icons on the controls make it easy to use for every driver.