Agrifirm is a cooperative enterprise in which more than 10,000 Dutch livestock farmers and growers have joined forces.

The cooperative is also a collector and sales organisation of grains in order to relieve the producers of their worries and to allow them to benefit from Agrifirm’s knowledge and cooperative advantage.

Deployment of a grain thrower

The large quantities of cereals collected are stored in a grain store. Filling a large warehouse is not always easy. Often a long distance has to be covered. A grain thrower is an efficient and simple solution here.

A grain thrower is a machine with a short conveyor belt with a high belt speed (25m/sec) that can throw the product far away. Belt throwers are very suitable for many types of grain and granular (bulk) products (such as manure and salt) and are reliable and effective. 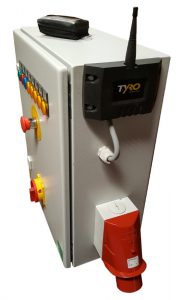 Agrifirm was confronted with a limitation during the filling of the large warehouses. Several pitchers were used in the warehouses, all of which had their own switchbox with a start/stop function and forward and reverse driving functions. The height adjustment was also a stumbling block as it had to be adjusted manually.

For the correct operation and settings, you needed to walk through the grain pile (upwards), which led to unsafe situations. Also because of the difficult operation it was decided to keep the pitcher running all day long, which resulted in high electricity costs.

The development of a switch box with an Aquarius receiver and Musca remote control makes it much easier for the staff to operate the grain throwers. The functions: lowering, raising, driving forward, reversing, on and off are now very easy to perform. Energy consumption is also drastically reduced as the grain thrower can now be easily stopped after each storage cycle.

The Musca remote control distinguishes itself by its compact size, moisture and dirt resistance and extremely low power consumption. By combining this compact transmitter with the waterproof Aquarius receiver, Tyro ensures an optimal user experience.